This page provides a history of sewer overflows and explains what we are doing to improve the problem.

A great deal of work has been completed to help reduce overflows in Kingston. There is still a lot we will do, as recommended in the recent Water and Wastewater Master Plans Update - including information on Pollution Prevention and Control Plans, and recommended projects to 2036 to reduce sewer overflows.

Sewage overflows are a historic problem, passed on from generation to generation, along with the evolution of sewage collection and treatment. To help explain the problem of overflows, we're providing a background on how the sewer system evolved in the municipality and a discussion around the limitations of underground infrastructure.

Prior to the 1950s, little thought was given to sanitary sewage, aside from just getting rid of it! Original sewers were built simply to drain everything straight out to the nearest river or lake.

In the City of Kingston, this generally meant that combined sewers (to collect both stormwater runoff and sanitary sewage) were built as needed and flowed straight out to Lake Ontario or the Great and Little Cataraqui Rivers. This happened for many decades.

Perhaps long ago, there was a time when nature was able to assimilate the small amounts of human waste from settlements on the shores of the Great Lakes, but those times are gone as populations have concentrated and grown. 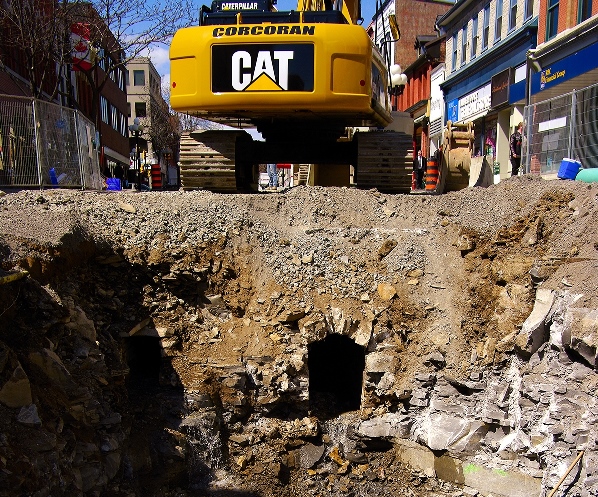 Original sewers were built simply to drain everything straight out to the nearest river or lake. This stone box sewer was replaced during major reconstruction activities on Princess Street in 2013. (Photo: Paul Wash)

Finally, in the 1950s, the municipality began recognizing the serious negative impacts of wastewater on the environment, triggered by regulations that were enacted in the Province, which required municipalities to capture wastewater and treat it. So, the City of Kingston built several things to address this problem:

Interceptor sewers were added in the 1950s to intercept sewage before being discharged to the environment.

At the time, it was accepted during the design of the new collection and treatment system that it would not be able to handle all the flow, particularly during wet weather. The system was designed to handle flow during dry weather mainly, but to allow for “overflowing” to occur during heavier rains. This overflowing would ensure that overloading of the sewer system could be managed and that basement flooding could be prevented.

So, at every location where an existing combined sewer was located, the new interceptor sewer would capture the low flows, but, when the flows became higher during rain or snowmelt, the additional volume would overflow from the collection system and continue down the original pipe to the environment.

While never measured, it is estimated that the 1950s improvements likely treated and captured anywhere between 60-80 percent of the annual average wastewater flow during wet weather.

In 1992, the first Pollution Control Plan (PCP) was completed for the City of Kingston. The report focused on identifying and addressing the primary sources of waterfront pollution in the City of Kingston, recognizing that both wastewater and stormwater runoff played a role. By this time, the City and neighbouring townships were installing primarily separated sewer systems, which meant that both a dedicated storm runoff collector and wastewater collector were built. Some replacement combined sewers were being built in the downtown core of the City, where separated sewers were deemed to be impractical or inappropriate.

The 1992 PCP ushered in an era of bypass reduction that continues to this day, recognizing that wastewater overflows are a significant contributor to lake and river pollution in the City of Kingston area, particularly adjacent to, or downstream of the combined sewer area downtown. The Pollution Control Plan recommended numerous projects focusing on all manner of reduction techniques, all the while favouring “end-of-pipe” and “conveyance” control projects over "source-control" projects. Here is a list of projects that resulted from the findings of the first PCP:

The map below highlights recent projects that reduce sewer overflow events. Click on a feature to learn more about it.

2000s - Ministry of the Environment guidelines

After the mid-1990s introduction of MOE Procedure F-5-5, an update to the PCP was completed in 2000. Once again, a suite of new recommendations was provided, including:

MOE Procedure F-5-5
is a ministry guideline for benchmarking combined sewer system performance as it pertains to overflows.

It was around this time that sewer separation, as a true ‘source’ reduction technique, came to the forefront of the recommendations, supported fully by the 2010 Pollution Prevention and Control Plan Update, which went so far as to prioritize downtown areas for future sewer separation - as capital road reconstruction programs would permit.

Sewer separation became the default method of sewer replacement for road reconstruction for all but very specific circumstances where no storm outlet was available. By the mid-2000’s, all new sewers were constructed as separated systems and the vast majority of reconstruction projects of combined sewer areas used separated storm and sanitary sewers as well.

The graphic below illustrates the progression of sewer separation since approximately the time of amalgamation, around the year 2000.  It shows the separation completed up until today, and beyond, as projected by the current 4-year capital road reconstruction program that concluded in 2018.

The 2010 Pollution Prevention and Control Plan Update also introduced the benefits of conducting “extraneous flow reduction” projects to help with reducing the wet-weather contribution from existing separated sewers. Extraneous flows are caused by otherwise clean storm or groundwater entering the sewer system through leaks or illegal connections. These are “leaky” sewers that generally do not have intended storm connections, yet they are found to react to wet-weather more than expected for a separated system. Techniques used for reducing these extraneous flows are numerous, but include works on the public and private sides, including such things as:

A recent update to Pollution Prevention and Control Plans has directed us to focus on source control strategies as the preferred path towards sewage overflow reduction. Nowadays, all new and replacement sewers are comprised of two pipe networks - separated storm and sanitary sewers.

In the long run, as the City of Kingston reduces storm and groundwater contributions to the sanitary sewer at the source, the amount and frequency of sewage overflow will decrease, since all the runoff once captured by the combined system is removed.

Utilities Kingston also has other significant initiatives that are happening now, all having an impact on the amount and frequency of sewage overflows in the City of Kingston: 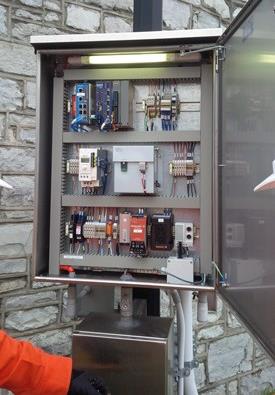