Flooding of basements can occur any time. It can happen to anyone who has a basement, even if never flooded before. While most often flooding occurs during big rains or rapid snowmelts in the spring, it can occur even during dry weather.

There are a number of reasons why basements flood. Flooding can occur by seepage or flow through the walls or foundation floor, from surface water sources, or by a sanitary or storm sewer backup. Please remember:

Basements are inherently prone to flooding. They are, by definition, the lowest level of a building, typically built partly or entirely below ground level.

Gravity does its best to move water from high to low. If either the groundwater level or sewer level around your home is above the basement floor, gravity will try to move that water into your basement. A crack in the foundation floor, for example, provides gravity with a perfect path for water to be pushed into the basement. Sanitary sewers always have a path to the home, by design, and it is called the sanitary sewer lateral. While under normal conditions, the lateral allows water to flow from your home to the sewer, there is the potential for water to move from the sewer toward your home.

The circumstances described are shown in Figures 2 and 3, which are discussed in more detail below.

In order to understand why a basement might flood, it is important to show the more common pathways, intentional or not, that permit water to flow into or around your basement. Figure 1 indicates a typical home in the City of Kingston, and how it is serviced during normal conditions. Not all homes in Kingston have a storm sewer lateral (as shown in the figure), but most just have a single sanitary sewer lateral.

Figure 1 highlights common problems (in red) that all might contribute to a higher risk of flooding. Most are on private property, or are things that are within a home owner’s ability to change - whether by regular maintenance or by specific projects to eliminate or reduce potential flooding sources. Some of these problems include: 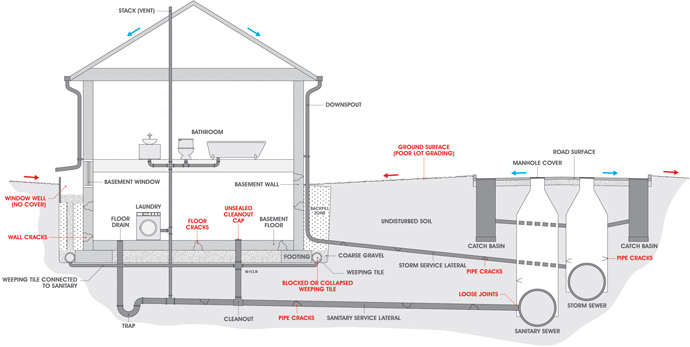 Most flood events do happen during wet weather, but it is quite possible for a flood to occur during dry weather too. Three of the most common reasons are as follows:

Flooding during wet weather is far more common that flooding during dry-weather. Rain, ground-thaw and snowmelt put a heavy load on drainage systems, including the storm and sanitary sewers found underground. With the additional water on the surface and underground, there are a number of reasons why a basement might flood. 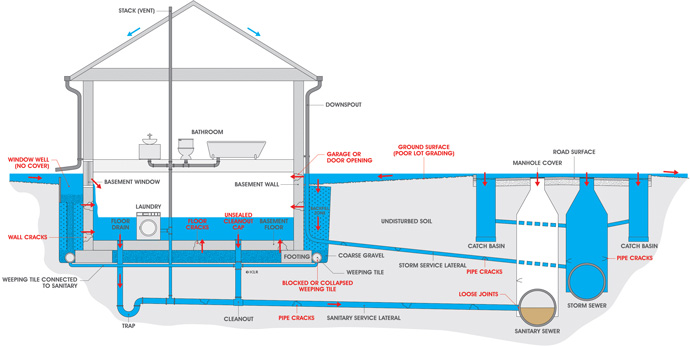 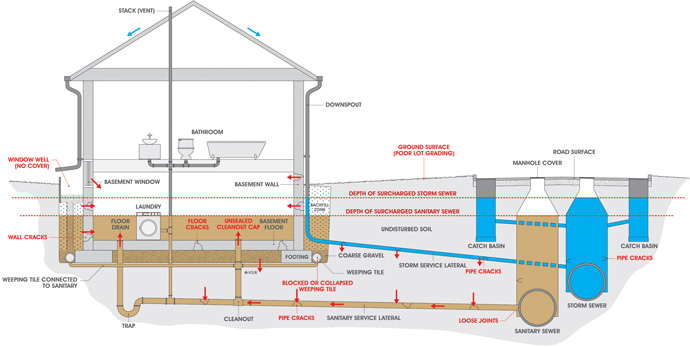 In summary, there are several different circumstances that can result in basement flooding.

If you have experienced floods and wish to learn more about why it happens and how to reduce the chance of it happening again, consider reviewing the following videos, produced by the ICLR:

Reducing the risk of basement flooding